Today, I spoke with an Anderson resident and was inspired by a whole new idea to improve curb appeal in the city.

I stopped a moment on my morning walk, because a woman spoke to me from her yard. She was bent over a potted plant and appeared to be re-potting it. I don’t mind a conversation about gardening.

“Nobody walks on the sidewalk anymore,” she said. “Everybody, except you, walks out there in the middle of the street.”

I maneuvered away from the aroma of a garbage bin tilted precariously next to the sidewalk, and stopped to answer her. Maybe people walk in the street to get a little distance from the five-mile-long row of trash bins by the sidewalk, I thought. Anyway, she seemed friendly, and if there were to be a conversation, I didn’t want to be smelling the garbage while we talked. It could have been worse, though; it could have been trash day, when the bins are full and waiting for the trucks to come. This bin on trash day could be full of putrid stuff at its foul-smelling zenith. Plus, lucky for me, it was parked a few feet away, right next to the curb, as if it were a small car innocently occupying a parking place. Down the street, trash bins stood in rows as far as the eye could see, and no, this was not trash pickup day. These Anderson bins spend every day out front of people’s homes, as if watching a July Fourth parade.

“Nice porch,” I decided to start with a compliment, “I like those wrap-around style porches.”

“Yeah, it gives the kids somewhere to drop their stuff,” she said. “But then, they always leave stuff lay where they finish with it. In the yard. The sidewalk. It’s me puts it up there.”

“Kids nowadays,” I remarked, “Is that a rhododendron?”

“Kids and the neighbors,” she retorted, ignoring my question. “Property values going to hell around here.” She stood up and brushed a wisp of hair away from her face. “Neighbors don’t care if their crappy houses make me get upside-down on my mortgage. Look at that one over there. That dead bush been there three years.” I looked in the direction she pointed but didn’t see a dead bush.

Three trash bins side-by-side on the other side of the street might be in the way of my view. The lady walked out to the sidewalk and said, “You can’t see it from there. Come over here, look right there; you can get the full impact of the curb appeal we got around this neighborhood. See?” Then she turned toward her house, eyed the wrap-around porch piled with broken chairs, half-rolled rugs, empty pottery, multiple bird cages, bent bikes, boots, plastic guns, and cases of empty pop bottles, and cocked one arm on her hip, like an LA decorator. “Curb appeal, nobody gives a damn! Have a nice day, mister.”

“You, too.” I resumed my walk, the dead bush already forgotten. But the LA decorator notion started me thinking maybe trash bins could be redesigned to resemble palm trees, then lining them up at the curb would make a neighborhood look like Beverly Hills.

Fake palm trees up and down every street. Next thing you know, we’d have weirdos on skateboards.

Bunch of fake palm trees and you’d soon have hookers working a parade of Rolls Royces.

Tour buses with guides pointing out famous criminal’s homes. “Look to your right. The house with the jungle growing out of the gutter, the boarded-over front door, and an old television antenna on the roof. That one. June 27th, exactly one year ago, that’s where the Anderson swat team thought they killed Jack the Stripper, but Jack turned out to be a retired librarian. Now, coming up on the left…”

Fake palm trees. Next we’d block the streets off; Disney’s filming a remake of Paradise Found this week. Already changed the name of the city from Anderson to Anderwood.

Fake palm trees. Door on the side of the tree. Vacuum mounted up inside. Hold your trash bag by the door, push a button, and WHOOSH! the whole bag is sucked up inside the tree; high up. Winds clear the stench, move it on to Muncie or Noblesville; they wouldn’t know the difference.

Fake palm trees in Anderson. Watch property values soar. The first step to gentrification of Anderson is redesigning those garbage bins. It’s an entrepreneurial opportunity waiting on just the right person with a little imagination.

I photographed these GREENISH BRAIN FRAGMENTS from extraterrestrial beings in an empty field next to a street ironically called International Way just 510 yards north of East 32nd Street in Anderson, Indiana, June 21, 2019 at exactly 10:21 AM. Needless to say, my discovery has been blown into proportions of Trumpian legend.

Yes, this is brain matter from a couple hundred giant extraterrestrial beings who blew their own brains out when allegedly they realized they had mistakenly landed in #AndersonIndiana.

Apparently, the alien navigator became confused by weather and the immense oceans of water presently standing in Indiana fields. I guess the aliens had done enough homework to know that Washington, DC was originally built on swampland near the Atlantic Ocean and made some sloppy piloting decisions.

Anyway, they drifted into the Anderson area totally hidden by thick cloud cover and landed ten spacecraft in this field and on the roof of the new Purdue building nearby on East 27th Street. The alien visitors immediately began their search for our leader. Which led to the tragedy and the remains of some 200 ET brains being scattered across this field. You can visit the area and see for yourself. This brain matter covers much of the field, and as yet, Defense Department officials have neither cleaned it up nor cordoned the area off as being off limits to ordinary citizens.

In the above photo, you can almost make out the outline of the extraterrestrial leader’s head and torso. Defense Department investigators are trying hard to blame this incident on the city of Anderson. Anderson is a convenient scapegoat, because with its dilapidated buildings, crumbling streets, and boarded up stores, it is so easy for observers to believe the worst. Again, Anderson’s reputation for repulsive blight (left over from departing manufacturing companies like General Motors) precedes it.

But one wild-eyed, loose-lipped official, furiously gulping down Long Island Ice Teas in Buffalo Wild Wings last night, let slip that the mass suicide was NOT caused by the sight of Anderson’s depressing curb-appeal. The mass suicide–by Rexim-Favor laser pistols–occurred right after the aliens asked a policeman to take them to our leader. The policeman promptly-summoned city officials, who, cognizant of the ethics of fair warning, even to aliens, showed the aliens a video compilation of just who our national leader is.

A member of the Advanced Aerospace Threat Identification Program (AATIP), who asked to be kept anonymous, described the aliens response to the video as “…crazy, even for aliens. They squeaked and ticked among themselves in their own language. And then they seemed to have gotten an order to assemble in that abandoned field. Suddenly, they all pulled a pistol of some kind, put it in their mouths and pulled the trigger. People in Anderson thought the loud noise and bright light was a massive lightening strike. No lightening strike I ever heard of could debrain 200 people in half-a-second, but that’s just me. It’s a hell of a mess.”

(Below) This particular large spill of alien remains contains the cell bodies, dendrites and axon terminals of neurons from the largest brain among all the beings so far accounted for in this particular task force of alien explorers. This, according to a spokesperson for AATIP, is the largest brain ever examined on earth, and it belongs to the creature believed to have been a celebrated alien artist tasked by his planet’s leader to sketch impressions of so-called life on Earth. 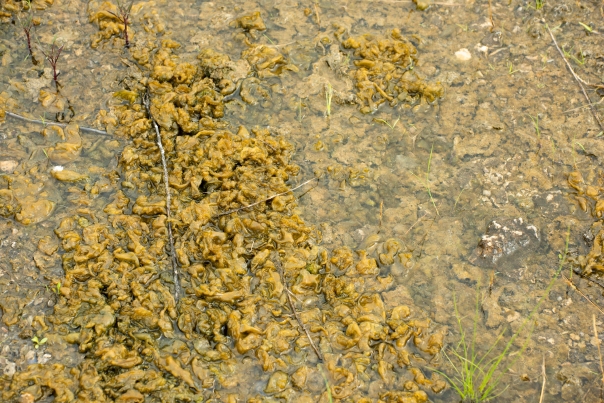 ALL POINTS BULLETIN: All ten alien spaceships have disappeared and have been reported stolen, allegedly by the same persons who five years ago frustrated Anderson police for months by stealing tires almost every night off of new cars parked in dealer lots in the city.